He is also referred to as Red Alien Ranger by people of Earth, as well as Mighty Morphin Alien Red Ranger a variation on his alternate in-show label, though it is more in reference to the show itself than a proper label.

While officially Delphine is the leader of the team, as Red Ranger, Aurico often figures in front of formations. He pilots the Red Battle Borg and, during his stay on Earth, the Red Shogunzord as well when the original pilot could not.

In Zeo, he transmitted the message from Aquitar to Earth, claiming that he and the other two Alien Rangers were standing by to offer their services at the first sign of trouble. This was the last time Aurico appeared in his civilian form.

During the invasion of the universe by Dark Specter's United Alliance, Aurico and the other Aquitian Rangers battled Divatox's army on Gratha, where they were defeated. They were later saved by Zordon's Energy Wave.

Aurico was last seen teaming with Eric Myers during Power Rangers Wild Force, on the episode Forever Red, as one of the ten Red Rangers that attacked the remnants of the Machine Empire on the Moon as they attempted to reactivate Serpentera. He then returns to Aquitar. Aurico's actor, David Bacon, was not available for the role, so Aurico never appeared unmorphed, and was voiced by Christopher Glenn. Also, the actor's voice was noticeably different from David Bacon if one puts the two side-by-side.

Aurico along with the other Aquitar Rangers and other Ranger teams are seen in Troy's premonition about the Legendary Battle.

After the apparently death of Vrak, Aurico is seen briefly with the other Rangers in Troy's premonition about the Legendary Battle.

Emperor Mavro was defeated, but the remaining thousands of X Borgs still stand. Tommy gathered all the existing Power Rangers, Aurico returned with his fellow Aquitar Rangers as part of the army of Legendary Rangers led by Tommy that helped the Mega Rangers defeat the Armada once and for all, fighting in a huge battle against hundreds of X Borgs and dozens of Bruisers. After the demise of the X Borgs, Tommy shook hands with Troy and teleported off along with Aurico and the Legendary Rangers. He then once again returns to Aquitar.

When events set into motion by Lord Drakkon caused the timeline to split into pocket universe, each anchored on a powerset, the Alien Rangers were split off into their own pocket universe. Red Aquitar Ranger eventually received Zordon's call through the Morphin Grid and was among numerous Rangers who rallied to his pocket dimension led by the Quantum Ranger for the last stand against Lord Drakkon, reunited in the Command Center.

Aurico along with the other Rangers their morphers or weapons are upgrade by Doctor K, he along with the Alien Rangers like the others team Rangers teleport to the Moon of the World of the Coinless, facing some new types of Ranger Sentinels.

When the timeline is restored so is Aurico. 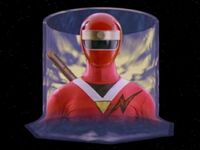 The Red Aquitar Ranger Ninja Power Star is a special Ninja Power Star that bears the likeness of the Red Aquitar Ranger and is marked with the kanji for "red". Unlike its counterpart in Ninninger, the first version of this star is exclusive to the Ninja Steel toyline while the second version was originally a part of the Super Ninja Steel toyline, but was ultimately never released. 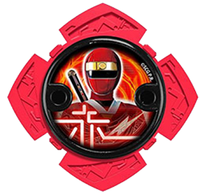 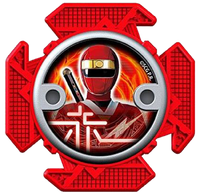