For the actor in Go-Onger, see Asuka Ono (actor).

Asuka (アスカ, Asuka) is AbareBlack (アバレブラック, Abare Burakku), the Black Ranger of the Abarangers who also serves as the team's mentor. Later in the show he was given a surname to be known as "Asuka Ono" (大野 飛鳥, Ōno Asuka).

Asuka is a Saurian Warrior from the Dino Earth who traveled to Another Earth to stop the Evolians from taking over. He has a tragic past. He was the last of his kind to fight the Evolians and escaped to Earth. He brought the Dino Bracelets and gave them to the Abarangers. However, prior to his arrival, the Dino Harp key was damaged, so he couldn't transform.

When he got it finally restored in Episode 7, he had some troubles during his first battles as he couldn't use his Dino Guts correctly, until his true sense of justice awakened. Asuka is a melancholic person, he is fast-willed and fastidious, but his high expectations lead him to be depressed often.

He has shown enormous amounts of power, as he has been able even of defeating a Giganoid and an upgraded KillerGhost on his own: however, due to his gentle personality, he often holds back during battles.

In Episode 35, he had his surname be "Asuka Ono" (大野 飛鳥, Ōno Asuka), due to the legal systems on Another Earth, and had used it only for Another Earth, meaning he was not born with it. His Bakuryuu partner is Brachio. With the mysterious girl's help Asuka was able to remember that he was the one responsible for breaking the Armor of Darkness out of it's seal and therefore the one responsible for it falling into Evolian hands.

Although at first Asuka had trouble confirming that Apostle of Destruction Jeanne was his wife Mahoro because of the resemblance, he later confirmed it during the destruction of the second Anamolicarus.

Unknown to the other Abarangers and his other friends who believed he died in the explosion, Asuka chose to wear the Armor of Darkness again to save Mahoro from its curse. Once it was confirmed that Asuka was alive and was wearing the Armor of Darkness, Mahoro regained her memory and she chose to save him from the armor and tricked AbareKiller into helping her destroy it at the cost of becoming Jeanne again.

Though forced to fight her again after being freed, Mahoro secretly sent a telepathic message to Asuka confirming that she is not under Dezumozorlya's influence like before and that she has gone back to the Evolian undercover as she had unfinished business with them.

After Apostle of Dawn Reje was reverted back to her infant form, and Mahoro passes her off to Asuka before being possessed by Dezumozorlya, Asuka recognized that she is his and Mahoro's child.

In the finale, when stabbed by Wicked Life Soldier Armor Dezumogevalus, Asuka and Mahoro almost give in to dying out of shame for their past actions, but Ranru gave them the courage to live for their child's sake, allowing them to break free, and both Ranru and Asuka defeated the Armor of Darkness recreation once and for all. After the final battle, Asuka and Mahoro named their new child Mikoto, after AbareKiller, and returned to Dino Earth with his family and the Bakuryuu.

In the episode Lost & Found in Translation, Asuka was renamed as Mikey who also serves as the Black Dino Ranger of this episode.

Asuka was brought back to Earth by his daughter Mikoto's power to help the team, and he was able to rescue Ryouga and Banban Akaza/DekaRed from Kazaku before they joined up with the others. Afterwards he participates in the victory party, with Mahoro returning from Dino Earth with Mikoto to also join the party.

Asuka appeared in the GoGo Sentai Boukenger vs. Super Sentai with Brachio, and his second child. He along with Tetsu, Hikaru, Tsubasa, and Nanami helped Eiji out during his battle with Chronos. He transferred his "Passionate Spirit" power to AkaRed to power DaiVoyager.

Asuka's appearances in the "Versus Series", Abaranger vs. Hurricaneger, Dekaranger vs. Abaranger, and Boukenger vs. Super Sentai, are featured in the Super Sentai Versus Series Theater, hosted by the heroes of Tensou Sentai Goseiger. Agri (Gosei Black) also dresses as Asuka in the Abaranger cosplay.

Years later, Asuka fought alongside not only his own team, but every single Sentai ranger in existence, against the Empire of Zangyack when it attacked the Earth in the Great Legend War. After fighting against hundreds of Gormin and their Zgormin commanders. AkaRanger noticed the fleet moving towards them, he gathered all the Rangers together and gave them the order to sacrifice their powers to wipe out the first invasion's armada.

AbareBlack appeared with his team among the first 38 Super Sentai whom collectively empowered Wild Tousai Shuriken King in its fight against the titanic Gillmarda, granting the Ninningers and Zyuohgers the power to perform the Zyuoh Ninnin Super Sentai Burst which destroyed Gillmarda with the combined power of all 40 Super Sentai. 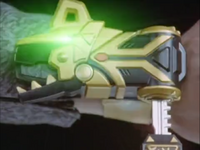 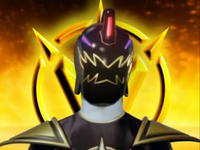 In this form, his fighting is similar to a Brachiosaurus, where he used brute strength to send his enemies flying and increased strikes.

It was revealed in Episode 30 that Asuka was the original wielder of the Armor of Darkness that he took out from its confinement by breaking the seal to save Mahoro and Mizuho from the Evoliens, but was unaware of its ability to drive the user insane. As a result he decimated the rest of the Dragon Tribe until he was somehow defeated by Mizuho who had become Apostle of Darkness Geilton and freed him from the armor. After being freed he had no memory of using the armor and the remainder of his people were afraid to tell him.

Eventually the mysterious girl was able to help him remember these events and he chose to defeat Jeanne and seal away the armor for good out of guilt for his past actions. But after learning that Jeanne is Mahoro he chose to take the armor back to save her. Sometime afterwards he would save the Abarangers from Trinoid #19: VultureTreasureLychee and then during the battle against Trinoid #20: RougeGiraffeRafflesiale his helmet came off, revealing his identity and awakening Mahoro's memory. This lead her to rejoin the Evolian as Jeanne, and with the promise of letting Mikoto have the armor when they defeated Asuka, though it was later revealed that Mahoro's plan was for two people to defeat Asuka by combining the power of good and evil to destroy the armor once and for all.

The AbareBlack Ranger Key (アバレブラックレンジャーキー, Abare Burakku Renjā Kī) is Asuka's personal Ranger Key and what became of his powers after he along with the rest of the 34 Super Sentai sacrificed their powers to end the Great Legend War.

This key along with the majority of the Ranger Keys were collected by the Red Pirates and later used by the Gokaigers. The AbareBlack Ranger Key was mainly used by Don Dogoier (Gokai Green), who used it to fight as AbareBlack. It was also used by Joe Gibken (Gokai Blue) on one occasion.

After Zangyack were finally defeated, the Gokaigers gave the Ranger Keys back to their rightful owners. It is presumed that Asuka received his key and became AbareBlack once more.

AbareBlack is among the vast pantheon of Rangers which are available in the mobile game Super Sentai Battle Base, with his Abare Mode being available as well.

AbareBlack appears with his team among all Sentai in the mobile game Super Sentai Legend Wars.