In its vehicle mode, it can fire energy bullets from the front sides. This space-based Zord possesses the capability of speed and mobility, even under zero-gravity conditions such as outer space. In its regular form, the Astro Zord is armed with a laser blaster.

This Zord is the second of the auxiliary Zords to be born out of the Ninja Nexus Prism after Mick saw a vision of the Astro Zord itself and threw a Ninja Star into it, creating the Astro Zord Star.

The Rangers were fighting against Hacktrack, who wants to strike from outer space. However, due to the monster's space flight capabilities, this made the Ninja Steel Megazord Dragon Formation's ascent a challenge in catching up as it started to reach its limit in the upper atmosphere. As it did, Mick throws the Zord Star to the Rangers, which allows them to summon the Astro Zord and form the Astro Ninja Steel Megazord, allowing the combination to go into outer space and defeat Hacktrack once and for all.

Mick informs the Rangers that the Astro Zord has taken off by itself, targeting the Warrior Dome. The Zord blasts a hole in the side of the ship, freeing Odius's prisoner, just as Ripcon shows up to see the damages. As the Astro Zord lands, its passenger is none other than the Gold Ranger.

4,500,000
The Astro Zord Star is removed as well as its Astro Launcher before the remaining body part transforms into its humanoid form and the Astro Launcher is reattached onto its back as its thrusters. Once it's fully transformed, it would perform a thumbs-up gesture.

This form, which adapts the Astro Zord's speed and mobility abilities, grants the Ninja Steel Megazord a massive flight boost coupled with the ability to chase down and battle giant-sized Monsters that are capable of extra-atmospheric or even zero-gravity combat, patching up Ninja Steel Megazord Dragon Formation limitation of flying only within the Earth's upper atmosphere.

The Astro Ninja Steel Megazord is armed with the Astro Launcher, which can be used as a short trident during normal combat to injure the enlarged monsters before launching the finisher.

Its finisher attack is the Cosmic Blast, where the Astro Ninja Steel Megazord charges up its Astro Launcher and fires three guided Ninja Stars which strikes the target in all directions to defeat the giant monsters, forming the Ninja Steel insignia in the process.

In the Halloween special, a slightly different version of the Astro Ninja Steel Megazord is seen with the Nitro Zord's arm instead of the Robo Red Zord as the latter had left with the Red Ranger to battle the Robo Rider Zord, who was under Cosmo Royale's control.

This Zord Star is marked with the kanji for "orbit" (宙, Chū). Its primary use is to summon the Astro Zord, as well as completing the helmet for the Astro Megazord. 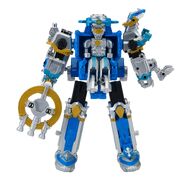