RangerWiki
Register
Don't have an account?
Sign In
Advertisement
in: Turbo, In Space, Ranger,
and 19 more
English

A Drive to Win

"You showed compassion and integrity Ashley, I chose you with pride to be the new Yellow Ranger."
―Tanya handed over her Yellow Ranger powers to Ashley[src]

Ashley was a recurring character during the beginning of the Turbo Era. She was an Angel Grove High School Cheerleader and was seen helping the terrified citizens of Angel Grove get to safety during one of Divatox's major attack on the city. Ashley was chosen by Tanya Sloan to take her place as the Yellow Ranger, taking over control of the Dune Star TurboZord and later gaining access to the Star Racer RescueZord.

When the Power Chamber was destroyed by Divatox and the defeated Power Rangers received word that the planet Eltar, home to their original mentor Zordon, had fallen to evil forces, Ashley and the other three new Turbo Rangers - T.J., Carlos, and Cassie - left Earth for outer space in a NASADA space shuttle, powerless but ready to fight to save Zordon.

Ashley and the other Rangers then met Andros, the Red Space Ranger, on the Astro Megaship, and she was given new powers as the Yellow Space Ranger, who later commanded the Mega V-4 (Saucer) Zord. When the Space Rangers returned to Earth, she enjoyed showing Andros her hometown. She discovered that he was telekinetic. Ashley offered to teach Andros billiards if he taught her how to use telekinesis. She would get distracted during the lessons, and thus never did get the hang of it. On Ashley's birthday, the monster Body Switcher had managed to make Astronema look like Ashley, and vice-versa. Ashley managed to escape, while disguised as Astronema and warned the other Rangers about the real Astronema posing as her. During battle, Andros got her Morpher, but had trouble telling who was the real Ashley, and he gained an idea, knowing only him and his fellow Rangers know how to activate the Morphers, he used that to his advantage, and gave Ashley her Morpher back.

She shared a love interest with Andros, who returned to Earth with her after the final battle in Power Rangers in Space.

Following the defeat of the Galactic Alliance of Evil she entered into a relationship with Andros. Her current whereabouts are unknown.

Ashley was featured in a chronicle of Power Ranger history compiled by Tommy Oliver shortly after he formed the Dino Rangers, which was found by the nascent Ranger team in the Dino Lab.

Ashley along with the other Space Rangers and other Ranger teams are seen in Troy's premonition about the Legendary Battle.

Emperor Mavro was defeated, but the remaining thousands of X Borgs still stand. Tommy gathered all the existing Power Rangers, Ashley returned with her fellow Space Rangers as part of the army of Legendary Rangers led by Tommy that helped the Mega Rangers defeat the Armada once and for all, fighting in a huge battle against hundreds of X Borgs and dozens of Bruisers. After the demise of the X-Borgs, Tommy shook hands with Troy and teleported off along with Ashley and the Legendary Rangers.

Ashley was shown in archive footage, along with the other Space Rangers in Scrozzle's database when the villains were looking for a past villain to revive with the Reanimizer, and came across Psycho Red.

When all the Power Rangers' histories are split into pocket dimensions, the Space Rangers, unbeknownst to them are placed in their own. Lord Drakkon attacks and she morphs with the other Rangers but is killed by Drakkon.

When the timeline is restored, so is Ashley.

Ashley is the sweet, kind-hearted and caring member of the team, compared to Cassie who is a tomboy. She is a optimistic and slightly clumsy person who always sees the positive side of a situation. Ashley is popular with other kids, and her enthusiasm allowed her to join to other clubs at Angel Grove High. Her dream is to become a fashion designer. She is also happy and easy-going.

Ashley immediately developed an interest in Andros. Their relationship developed throughout the year, and she grew to care for him deeply. However, when Zhane was awakened, he spends time with Ashley, which made Andros jealous, but Zhane convinced him that they were just friends, so Andros was able to ask her out on a date.

Bubbly, optimistic, and popular, this cheerleader from a wealthy family sometimes lets her social life interfere with her school work. She is upbeat person who always sees the glass as half-full. She’s popular with the other kids, a cheerleader, and belongs to just about every club in school. There are times when her grades suffer because she gets “over involved” in her school activities, but she always managed to pull through. Her dream is to become a top fashion designer like Donna Karan.[1][2]

In Five of a Kind, Ashley, along with Andros, Carlos, and Cassie, disguised themselves as the Blue Space Ranger in an effort to fool Psycho Blue. 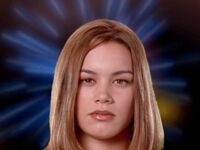 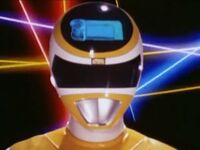 TV STORY-Invasion of the Body Switcher 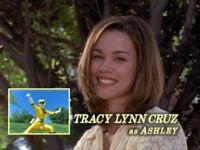 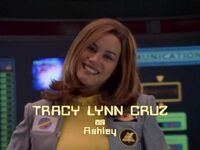