Chase Into Space, Part I

"These are your new Zords. They are more powerful then any before."
―Phantom Ranger[src]

Artillatron was the Zord of the Phantom Ranger and used as a Carrierzord of the Rescuezords.

The Artillatron had several storage compartments for each Zord, and could detach its arm cannons to be used by the Rescue Megazord. When not in use, it was held in the Turbozord hangar bay, and would emerge from beneath a domed sports stadium.

It may still lie dormant on Earth, given the fact that Goldgoyle only destroyed its arms in the final battle, leaving the rest of the Zord intact.

Artillatron did have what appeared to be a Warrior Mode, though it was never used for combat, but supplies the Megazords with two cannons that also served as Artillatron's arms. 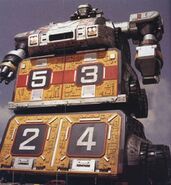