The Armor of Darkness (暗黒の鎧, Ankoku no Yoroi)[1] is a suit of armor from Dino Earth that turns its owner into a monster bent on destroying everything in sight, passing to the one who defeat its wielder. It was because of Asuka that the armor came to Evolian hands by Geildon who defeated him, maintaining his free will. Jannu succeeded Geildon in wielding the armor before Asuka took it back to save Mahoro. To free him from it, Mahoro reassumed being Jeanne and teamed with Mikoto to take it. However, as Mahoro planned, as Asuka was defeated by two people rather than a sole individual, the armor dissolved once it bounded to Mikoto. By the finale, Dezumozorlya used Asuka and Mahoro's fear of the armor to create his own version of it as Armored Wicked Life Soldier (鎧の邪命戦士, Yoroi no Jameisenshi, 49, 50), which was soon destroyed by AbareYellow and AbareBlack.

The Armor of Darkness arms its hosts with an ax and a battle shield. When it possession Asuka and Jannu/Mahoro, the armor granted them a long blade capable of releasing energy waves. When the armor was revived in a new form by Dezumozorlya, it was granted a dual-ended spear.

Wearers of the Armor of Darkness 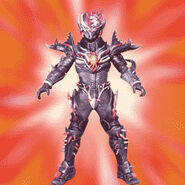 Retrieved from "https://powerrangers.fandom.com/wiki/Armor_of_Darkness?oldid=846979"
Community content is available under CC-BY-SA unless otherwise noted.