The Armada Megazord is a robot designed and created by Emperor Mavro as a gift to his son Prince Vekar. Although it's unknown exactly how it is built he has the Royal Guards bring the robot which Vekar deeply admired. Vekar thought that the Megazord was a chance to prove himself better than his brother Vrak.

During battle the Megazord can move at high speeds to evade laser attacks. The arms are equipped with bows that can fire Armada Arrows and are also bladed to be utilized for close combat.

While its opponent is incapacitated the Megazord can fire an energy blast from its chest known as the Armada Galactic Strike and was it's strongest attack since it blasted the opposing Megazord apart.

The Armada Megazord is finally destroyed by the Ultimate Legendary Megazord killing its pilot in the process; the Emperor's attendant and Vekar's guardian Damaras finds his Prince's smoldering body in the wreckage and swears revenge on the Rangers. 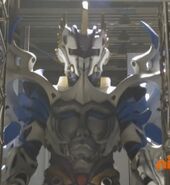 The Megazord docked inside the Armada Mothership.
Add a photo to this gallery

Retrieved from "https://powerrangers.fandom.com/wiki/Armada_Megazord?oldid=834040"
Community content is available under CC-BY-SA unless otherwise noted.