Arachnitor is a Nighlok who wanted to get rid of Master Xandred in his desire for power. His plan included using the same sealing symbol that was used on Master Xandred in the past generation, but needed Octoroo's help to get it. When Octoroo poisoned the team's drinks while they were at Tengen Temple, Jayden took a sip and became sick. While Arachnitor took on the Samurai Rangers, Octoroo demanded the sealing symbol in exchange for the antidote that would cure Jayden. With Antonio not knowing about Deker's true identity, he wanted him to try out his cooking, but when he heard about the Nighlok attack, he was too late as his friends were gravely injured and learned the truth about Deker as he took Jayden to a faraway place. As punishment for defying Master Xandred, Arachnitor was taken back to the Netherworld and was given Master Xandred's newfound power and by the next episode, he becomes a mindless Nighlok. 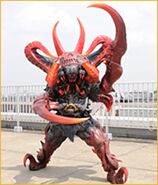 Retrieved from "https://powerrangers.fandom.com/wiki/Arachnitor?oldid=677212"
Community content is available under CC-BY-SA unless otherwise noted.