"This just in. All programs are canceled!"
―Final words upon his death[src]

Kitaneidas sent this Savage Sky Barbaric Machine Beast to interfere with television signals and transmit his own hypnotic signals as a news anchor on his own news show. He brainwashes the masses into polluting the city while forcing the Go-Ongers apart (by having their wishes come true--Sousuke in the global Grand Prix, Saki an idol, Renn a quiz master, and Hanto a wealthy heir). He called an Ugatz to be the cameraman to televise Gunpei's certain death but his belief in the others encouraged them to come to his rescue. Antenna Banki was defeated by GunBir-O's Gunpherd Gunfire. 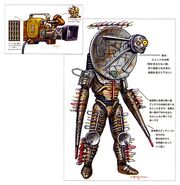