An 18-year-old college student. She defeated the Zyudenryu Dricera while in America, and became a warrior, gaining its power. A cheerful, “High Kick Girl”, she declares herself the “Horned Brave” (角の勇者, Tsuno no Yūsha) and she specializes in Hand-to-Hand combat. She is from America, studying abroad, and is the daughter of a wealthy family. A butler known as “Gentle” is taking care of her in her current accommodations.[1] She has a crush on Daigo.

Amy and the other Kyoryugers were summoned by the SP Zyudenchi to help their descendants defeat Remorseful Knight Arslevan. Zyuden Sentai Kyoryuger Returns: 100 YEARS AFTER

Kyoryu Pink appeared with his team among the first 38 Super Sentai whom collectively empowered Wild Tousai Shuriken King in its fight against the titanic Gillmarda, granting the Ninningers and Zyuohgers the power to perform the Zyuoh Ninnin Super Sentai Burst which destroyed Gillmarda with the combined power of all 40 Super Sentai. Doubutsu Sentai Zyuohger vs. Ninninger: Message from the Future from Super Sentai

Amy also has an array of special talents, from working a remote with her feet to defeating a group of zorima with a unicycle. Having studying abroad in America, she also knows a good amount of the English language.

When they were captured, Amy revealed to Souji that she can work a remote control with her feet, an ability that she uses to free Souji and herself. Brave 10: Zander! Gold Revives

Amy can also ride a unicycle, as seen when she borrowed one to defeat a group of Zorima, without becoming Kyoryu Pink. Brave 11: Utchi! How Cool

Amy also had the tendency to want to help people from the past such as the case of Utsusemimaru and Ramirez. (The former being a warrior from the Warring States Period and the latter being a deceased Spirit from hundreds of years ago.) Brave 6: Stop! Sing, Candelilla Brave 11: Utchi! How Cool 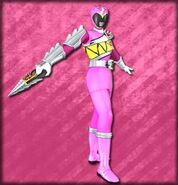 Kyoryu Pink Armed On as depicted in Super Sentai Battle: Dice-O
Add a photo to this gallery

Kyoryu Pink appears with her team in the Nintendo 3DS Zyuden Sentai Kyoryuger: Game on Gaburincho.

Kyoryu Pink is among the vast pantheon of Rangers which are available in the mobile game Super Sentai Battle Base.

Kyoryu Pink appears with her team among all Sentai in the mobile game Super Sentai Legend Wars.

Armed On (アームドオン, Āmudo On) is Kyoryu Pink's extension form accessed by using two copies of the Dricera Zyudenchi in her Gaburivolver. Sporting spiky silver armor across her right arm, Armed On gives Kyoryu Pink access to her Zyuden Arms weapon, the DriceLance.

A Zorima was disguised as Kyoryu Pink by Debo Yakigonte as part of a plot to break the Kyoryugers up, by calling Kyoryu Green a coward. Brave 7: Angry! Daigo's in Big Trouble

The Kyoryu Pink Ranger Key (キョウリュウピンクレンジャーキー, Kyōryū Pinku Renjā Kī) is a Kyoryuger Ranger Key given to the Gokaigers by Amy. As a pink key, it is primarily used by Ahim de Famille (Gokai Pink).

As Kyoryu Pink, her suit actor is Mizuho Nogawa (野川 瑞穂, Nogawa Mizuho), who was previously the suit actor for Escape Evolve in Tokumei Sentai Go-Busters and would later serve as suit actor for ToQ 5gou in Ressha Sentai ToQger.

Retrieved from "https://powerrangers.fandom.com/wiki/Amy_Yuuzuki?oldid=769751"
Community content is available under CC-BY-SA unless otherwise noted.