Alata (アラタ, Arata) is Gosei Red (ゴセイレッド, Gosei Reddo) of the Goseigers. He is a Gosei Angel of the Skick Tribe.

Alata is 21 years old at the beginning of the series.[1]

Alata is a member of the Skick Tribe who has been best friends with Eri since childhood.

Gosei Red walks to Gokai Red, who slowly lands using a swinging rope, and nods that he makes a good landing. Before walking off, Gosei Red gives Gokai Red a high five, and we, the viewers, turn our attention to Gokai Red while Gosei Red waves from behind.

TV STORY-Epic 50: Protecting the Planet is an Angel's Duty

Alata appears with his team hosting the Super Sentai Versus Series Theater, a special event on TV Asahi during the run of Goseiger, airing an hour before. A compilation of thirteen Super Sentai crossover movies in half-hour parts. The movies had commentary at the beginning and end by the Goseiger about the teams and the storylines within the movies and along with that, they also talk about what's coming up on their show, they also cosplay as characters from previous series.

Alata cosplays as Kenta Date (MegaRed), Ryouma (GingaRed), Matoi Tatsumi (GoRed), Kakeru Shishi (GaoRed), Yousuke Shiina (HurricaneRed), Ryouga Hakua (AbaRed), Banban "Ban" Akaza (DekaRed), and Satoru Akashi (Bouken Red). In the cosplaying, Alata is the only Goseiger who kept the same color, gender and alignment through all of his identities. (Red, male, hero). The only Red he didn't portray of the teams cosplayed was Kai Ozu (since he was a Dekaranger when the girls portrayed Magiranger)

Just a few weeks after Brajira's defeat, Alata unexpectedly is forced to face the sudden arrival of the Space Empire Zangyack on Earth, who rendered him and the rest of the Goseigers helpless. After the arrival of AkaRenger and Big One, he fought alongside not only his own team, but every single Sentai ranger in existence, against the Zangyack when it attacked the Earth in the Great Legend War. After fighting against hundreds of Gormin and their Zgormin commanders. AkaRenger noticed the fleet moving towards them, he gathered all the Rangers together and gave them the order to sacrifice their powers to wipe out the first invasion's armada. After losing his powers, Alata agreed that it was nice to lose their powers if it meant saving the world from the space invaders.

Some time later, Alata and the other Goseiger temporarily regain their powers from their successors, the Kaizoku Sentai Gokaiger, by stealing their Ranger Keys back from the pirates, changing them back to their changers to fight once again. However, during an attempt to regain the key for their ally Gosei Knight, Alata inadvertently lets all of the Ranger Keys become captured by the Black Cross Fuhrer and is forced to fight alongside Captain Marvelous against the revived Brajira. The duo work together to stop the Goseiger villain and ultimately the Fuhrer's forces, where Alata teaches Marvelous the importance of protecting Earth before returning the keys after the defeat of the ancient enemy with the Earth in the hands of the pirate heroes. Alata's powers were returned after the Gokaigers released the 192 Ranger Keys after the defeat of the Zangyack Empire.

Alata, alongside his team (bar Gosei Knight), among the majority of the Super Sentai heroes, was caught up in the "Super Hero Taisen" incident. The Goseigers attempted to fight the monsters of Dai-Shocker

as he was apparently hunting down the Sentai teams. When Tsukasa and Marvelous' ruse was revealed, the Goseigers appeared with the other Super Sentai through the dimensional wall

, with Alata lending his Reflecloud Gosei Card to Decade for defense against him. This allowed an opening for the Riders to defeat him, revealing him to be Narutaki

Gosei Red appeared as part of a conference of the first 38 Reds led by Red Falcon, whom addressed the Ninningers and Zyuohgers as the greater Super Sentai pantheon intervened to save them from defeat at the hands of the titanic Gillmarda. Empowering the Combination Nin Shuriken to form Wild Tousai Shuriken King, the first 38 Super Sentai further imbued their successors with the power to perform the Zyuoh Ninnin Super Sentai Burst, destroying Gillmarda with the combined power of all 40 Super Sentai.

Alata joined the Super Sentai Strongest Battle as a member of Flying Team. It’s unknown whether he participated in any of the matches, but his team was eliminated after losing the second round against the Swordsman Team.

Alata alongside with his Sentai Red Ranger predecessors appeared to help the Zenkaigers.

During the climatic final battle itself, he can be seen fighting alongside MagiRed, Kamen Rider Wizard, Kamen Rider Ghost and Zenkai Magine.

Alata has an innate ability to see through to the true essence of things. Unlike his Skick Tribe partner Eri, Alata is ten times more sensitive to the wind and he can easily pick up and track evil around the area. Similar to Eri, he also has a bubbly and positive personality. Whenever things get get rough, he never gives up and fights his way through. Alata truly believes in his moral of protecting the earth and everyone. He quickly befriended Nozomu Amachi and truly trusts him, rejecting Hyde's attempt to erase his memories of the Goseigers. However, despite being a strong leader for the group, Alata is usually an airhead and often does things before thinking about them.

As Gosei Red, he has a Dragon motif. He pilots the Gosei Dragon. Gosei Red's main weapon is a sword called the Skick Sword that resembles Gosei Dragon's tail. As a member of the Skick Tribe, Gosei Red can use Gosei Cards of that tribe with his Tensouder.

The Gosei Red Ranger Key (ゴセイレッドレンジャーキー, Gosei Reddo Renjā Kī) is Alata's personal Ranger Key and what became of his powers after he along with the rest of the 34 Super Sentai sacrificed their powers to end the Great Legend War.

This key along with the majority of the Ranger Keys were collected by the Red Pirates and later used by the Gokaigers. The Gosei Red Ranger Key was mainly used by Captain Marvelous (Gokai Red), who used it to fight as Gosei Red. It was also used by Don Dogoier (Gokai Green) on three occasions and Gai Ikari (Gokai Silver) on one occasion.

After Zangyack were finally defeated, the Gokaigers gave the Ranger Keys back to their rightful owners. It is presumed that Alata received his key and became Gosei Red once more.

A Goseiger Zyudenchi, bearing the likeness of Alata, is part of the Legend Sentai Zyudenchi toyline which can be used in Super Sentai Battle: Dice-O.

Goseiger Ressha (ゴセイジャーレッシャー, Goseijā Ressha) - The Ressha associated with the Goseigers, based off of Gosei Red's Gosei Dragon; when replacing Red Ressha in ToQ-Oh, it forms ToQ-Oh Gosei Great. Also appears as an SG Ressha. 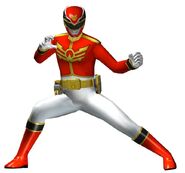 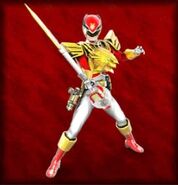 Gosei Red is among the vast pantheon of Rangers which are available in the mobile game Super Sentai Battle Base, with his Super Goseiger form being available as well.

Gosei Red appears with his team among all Sentai in the mobile game Super Sentai Legend Wars.