RangerWiki
Register
Don't have an account?
Sign In
Advertisement
in: Denshi Sentai Denziman, Articles in need of major additions, Sentai Ranger,
and 5 more

Akira was an ambitious tennis player striving to reach the top when the Vader Clan first attacked. During the attack, she witnessed her coach burn to death just before being recuited by Denzi Dog IC. After the team's first victory, Akira initially quit the Denziman so she could pursue her tennis career. After soon realized that saving the world as Denziman was more important, she reunited with her team. She then started teaching swimming lessons at the Athletic Club. She is also an expert piano player.

Akira and her team joined up with the other nine Sentai to stand behind the newest Sentai, the Turborangers, as they faced off against the Boma Hundred Tribes.

DenziPink is among the Sentai warriors seen in clips when Miku Imamura (MegaPink) lectured Sae Taiga (GaoWhite) about the past female Super Sentai warriors and their shared mastery of disguise and habit of changing their clothing in the blink of an eye, something that Sae had never done before.

Years later, Akira fought alongside not only her own team, but every single Sentai Ranger in existence, against the Empire of Zangyack when it attacked the Earth in the Great Legend War. After fighting against hundreds of Gormin and their Zgormin commanders. Kaijou noticed the fleet moving towards them, he gathered all the Rangers together and gave them the order to sacrifice their powers to wipe out the first invasion's armada. The DenziPink powers are later utilized by Ahim de Famille via the Ranger Keys.

After the Zangyack's final defeat, Marvelous returned the Ranger Keys to their original owners. It is assumed Akira and her team have their powers again and will continue their duties as the Denziman.

Akira, alongside her team, among the majority of the Super Sentai heroes, was caught up in the "Super Hero Taisen" incident which eventually resulted in the Super Sentai teams and Kamen Riders joining forces to defeat both Dai-Zangyack and Dai-Shocker. During the final battle, she was seen with DynaYellow fighting Kasha.

DenziPink appeared with her team among the first 38 Super Sentai whom collectively empowered Wild Tousai Shuriken King in its fight against the titanic Gillmarda, granting the Ninningers and Zyuohgers the power to perform the Zyuoh Ninnin Super Sentai Burst which destroyed Gillmarda with the combined power of all 40 Super Sentai. 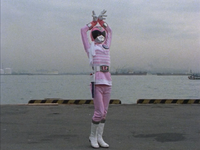 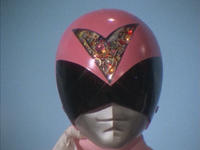 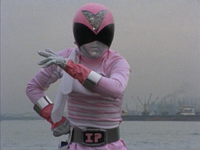 The DenziPink Ranger Key (デンジピンクレンジャーキー, Denji Pinku Renjā Kī) is Akira Momoi's personal Ranger Key and what became of her powers after she along with the rest of the 34 Super Sentai sacrificed their powers to end the Great Legend War.

This key along with the majority of the Ranger Keys were collected by the Red Pirates and later used by the Gokaigers. The DenziPink Ranger Key was mainly used by Ahim de Famille (Gokai Pink), who used it to fight as DenziPink.

After Zangyack were finally defeated, the Gokaigers gave the Ranger Keys back to their rightful owners. Akira received her key and became DenziPink once more.

Akira Momoi/DenziPink: Denziman's sole female, a former tennis player. In actuality, she is a descendant of the beings of planet Denzi, who were destroyed by the Vader Clan. She specializes in attacks which utilize akido.

DenziPink is among the vast pantheon of Rangers which are available in the mobile game Super Sentai Battle Base.

DenziPink appears with his team among all Sentai in the mobile game Super Sentai Legend Wars.