She was once the Princess of the planet Famille, the planet and her family shared names. After the planet was destroyed by Space Empire Zangyack, the Empire believed that she was killed along with her family.

Ahim traveled from planet to planet until she witnessed the four Gokaigers. She begged them to let her join the Gokaigers. She wanted to fight for revenge and to whoever is out there, to let them know that her race is still alive and she is fighting to take back what the Zangyack had stolen. Ep. 8: Little Spy Tactics Ep. 12: The Guaranteed Showy Samurai

The 41st episode elaborates on her early days as Gokai Pink. Marvelous and Joe note that she wasn't a good fighter, unable to use her sword or pistol without losing her balance. Luka and Ahim did not match up when it came to verbal jokes, unlike the sisterly bond they have developed since. Doc notes that she was unable to do any housework without making things worse. However, she was the pacifier of the group, somehow able to diffuses the arguments that ensued among the other four. Ep. 41: Something I Don't Want to Lose Eventually her skill in the other fields improved to match the others, and whenever the team swapped weapons, Ahim usually copied Don's dual-pistol technique.

Ahim was one of the first to accept Gai into the group as Gokai Silver, and assured him that one day he would rise to become a full pirate instead of an apprentice. Ahim and Doc were the only ones to take Gai's lessons in Sentai history seriously, She, Doc, and Gai became very close. Often, Sentai members like the Hurricanegers and Ninjaman preferred them over their arrogant, less compassionate senior shipmates. This bond was tested when Gai and Doc were infected with an enemy curse that made them attack each other. Ahim believed in them and put herself between the two. Neither could bring themselves to attack her, and the curse was broken.

Gai has speculated that Marvelous is attracted to Ahim, which Marvelous has denied vehemently and even beaten up Gai to disprove. Ep. 41: Something I Don't Want to Lose

The Gokaigers returned to Earth in a quest spearheaded by Captain Marvelous with the goal being the treasure inside the Link Cube. As Marvelous acquired the treasure personally while Gai arranged for the legendary Sentai that had emerged since their initial departure to provide their Ranger Keys to assist them in battle, Ahim and the others were sent to provide a distraction, guided by Navi into a confrontation with the four Zyuman members of the 40th and current Super Sentai, the Doubutsu Sentai Zyuohger. Engaging the Zyuohgers so as to stall them, Gokai Pink fought Zyuoh Shark one-on-one followed by her counterpart, Zyuoh Tiger. Finding themselves overwhelmed by the Zyuohgers' Instinct Awakened modes, the Gokaigers selected from the Ranger Keys of recent years that Gai had acquired in order to turn back the tide of the battle, with Gokai Pink Gokai Changing into her counterpart from the Zyuden Sentai Kyoryuger. Ep. 28: The Space Pirates Return

Gokai Pink appeared with her team among the first 38 Super Sentai whom collectively empowered Wild Tousai Shuriken King in its fight against the titanic Gillmarda, granting the Ninningers and Zyuohgers the power to perform the Zyuoh Ninnin Super Sentai Burst which destroyed Gillmarda with the combined power of all 40 Super Sentai. Doubutsu Sentai Zyuohger vs. Ninninger: Message from the Future from Super Sentai

Gokaiger had two video games released during its run, Super Sentai Battle: Ranger Cross and Kaizoku Sentai Gokaiger: Gathered Transformation! 35 Sentai!. Gokai Pink appeared with her team in both of them. 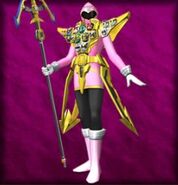 Gokai Pink is among the vast pantheon of Rangers which are avaliable in the mobile game Super Sentai Battle Base.

Gokai Pink appears with her team among all Sentai in the mobile game Super Sentai Legend Wars.

Like Gokai Green, Gokai Pink is a ranged fighter, trading her Gokai Saber for Gokai Blue's Gokai Gun which she wields alongside her own. Unlike the wild and rapid firing of Doc however, Ahim wields her guns with skill and finesse, typically firing in two different directions at once with great accuracy. When performing a Gokai Change, she typically transforms into previous pink or white rangers.

Ranger Keys Ohranger-Gokaiger
Add a photo to this gallery

As a Gokaiger, Gokai Pink has access to the powers of any ranger. While there's the obvious preference for pink or white, she has also been seen using other color rangers' suits and powers. She's also been known to take on powers of past male rangers, with the suit becoming a female version of its previous design.

This form is exclusive to Gokaiger Episode 23.

This form is exclusive to Gokaiger Episode 17.

This form is exclusive to Gokaiger Episode 51.

This form is exclusive to Gokaiger Episode 30.

This form is exclusive to Gokaiger Episode 42.

This form is exclusive to Gokaiger Episode 44.

This form is exclusive to Gokaiger Episode 29.

As shown in cards, Gokai Pink, along with the other Gokaigers, can use Gai's Gold Anchor Key to become Gokai Pink Gold Mode. However, as it is Gai's key, Gokai Pink's Gold Mode is identical to Gokai Silver's Gold Mode, with the 15 Sixth Rangers rather than her 32 counterparts.

The Gokai Pink Ranger Key (ゴーカイピンクレンジャーキー, Gōkai Pinku Renjā Kī) is Ahim's personal Ranger Key which allows her to transform into Gokai Pink. Whereas the keys of the 34 Sentai were created out of the sacrifice of their powers in the Great Legend War, the origin of the Gokaiger Ranger Keys is unknown, though it can be assumed AkaRed had a role in their creation.

This Ranger Key was turned into a Ranger puppet once, by Basco. Along with the other Gokaigers bar an incapacitated Marvelous, Ahim confronted and defeated the puppet Gokai Pink. Ep. 48: The Fated Showdown

She has geniality and grace that don't suit a pirate, making her quite different from her 4 shipmates. This has also caused people to underestimate her on occasion. If a person is in distress, she can't help but want to help them. However, because she is always looking for someone to save, she can be a pain in the neck for her teammates. She is also thrown off by Marvelous's personality and shows concern at times. Also, she loves tea. She and Don are considered the weaker Gokaigers of the team, although Ahim seems to be the more powerful of the two as she seems to actually know how to fight. However, after training with Jan Kandou, she became more skilled in hand-to-hand combat.

in the Kamen Rider W

finale. Prior to the series, Koike stated she wanted to become a Shinkenger the most.

When Ahim disguised herself as Matsuri Tatsumi in Ep. 23: People's Lives are the Future of the Earth, she was portrayed by Kayoko Shibata (柴田 かよこ, Shibata Kayoko).

In the Korean dub of Gokaiger entitled Power Rangers Captain Force, which aired in South Korea, Ahim as with the rest of the first five Gokaigers keeps her name (likely because they are not from Earth and thus don't have normal Japanese names), while her Ranger designation is Captain Pink.

Retrieved from "https://powerrangers.fandom.com/wiki/Ahim_de_Famille?oldid=928465"
Community content is available under CC-BY-SA unless otherwise noted.