Ryunosuke bemoans his abandonment of his kabuki allies with an upcoming performance as his Shodophone is eaten by an Ayakashi.

As Genta points out the possible yet risky combination of their Origami with the Ushi Origami, Ryunosuke visits his old kabuki theater, reminiscing about his life before becoming a Shinkenger. On his way back to the Shiba House, he comes across the Ayakashi Futagawara terrorizing people and eating everything in sight. When he tries to transform, his Shodo Phone is eaten, leaving him to watch his comrades fight Futagawara and get overpowered before the Ayakashi takes his leave. Without his Shodo Phone, Ryunosuke goes back to the kabuki theater to watch his friend Shintaro practice for an upcoming performance that both were supposed to perform together until Ryunosuke became a Shinkenger. The next day, Futagawara resumes his feeding frenzy as the Shinkengers arrive to face him and attempt to regain Ryunosuke's Shodo Phone, However, Juzo and Dayu arrive to prevent the Shinkengers from defeating Futagawara, allowing the Ayakashi to eat even more. Elsewhere, Ryunosuke (in disguise) approaches Shintaro to inspire him to perfect the dance, and to make amends for what he feels is leaving his best friend to fight the Gedoushu. Having succeeded, Ryunosuke joins the others as Juzo and Dayu destroy Futagawara themselves unleashing his full power, with Shinken Red barely retrieving Ryunosuke's Shodo Phone before the Ayakashi grows to immense proportions and gains a shield to defend and attack with. The Shinkengers form Daikai-Shinkenoh, but they cannot break through Futagawara's shield. Shinken Blue uses this opportunity to convince Super Shinken Red to take out the All Samurai Gattai Disk and combine all of the Origami. As the Secret Disk is placed into the Inromaru, Shinken Blue activates its Mojikara, allowing all of the Origami to combine into Samuraihaoh. With their newfound power, the Shinkengers break through Futagawara's wall-like shield and destroy him. After the battle, Ryunosuke watches Shintaro prepare for the kabuki performance and he intends to keep a vow to his friend that he will return to kabuki once the Gedoushu are finally defeated. 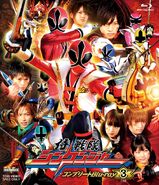 Shinkenger Volume 3, Blu-ray cover
Add a photo to this gallery

Retrieved from "https://powerrangers.fandom.com/wiki/Act_35:_Eleven_Origami_All_Combination?oldid=858410"
Community content is available under CC-BY-SA unless otherwise noted.