Vacuuma, stated as Salamandes' strongest saima, was used to capture four of the five Tatsumi siblings, lock them up, freeze them to death, in order to prove his strength and superiority to Grandiene and to silence the criticisms of his elder siblings Cobolda and Denus.

When Matoi comes to rescue them, Vacuuma tried to prey on Matoi, but he lived with his head down. And it blocks Matoi running to save his sibilings and blows off the chill Vaccuma continues to spewed out a frost breath, and with Salamandes, they torments Matoi with a wave attack. But when Salamandes says he has a brother but no colleague, Matoi laughs at him and Matoi recharges his fighting spirit himself. And he started fighting again.

Eventually, Vaccuma is stabbed in the stomach by Matoi, who uses V-Lancer, warms Nagare and others by drilling holes in the freezing zone, but Vacuuma uses cold breath to resist him by freezing him.

But, Matoi freezes and Vacuuma falls in pain from the weapons in its stomach and the damage it suffered from in battle.

When Pierre uses the Resurrection Card to revive Vacuuma, GoGoFive initially tries to use Max Victory Robo to fight it until Salamandes activates a Saima Zone, cutting off its solar power and weakening it greatly. With no other options, the team sends out Victory Mars to fight in its place due to its lack of need for solar power to fight in the Saima Zone; the two briefly fight in the water until the mech escapes from it before finally making Vacuuma explode with the Mars Flare.

After then, Vaccuma was later summoned by Chaos when he and Salamandes brought the GoGo-V to Hell but Chaos lost control when his staff was broken.

Vacuuma's soul was absorbed by Salamandes in order for him to escape from Hell.

Vacuuma loves to make people small and swallow them in his stomach.

He was shown to be a formidable opponent for the GoGoFive, as he managed to eat most of them, although he was later killed by GoGoFive. He is also loyal to Salamandes.

Its main ability is to use a beam to shrink down a preys, then vacuum them within its mouth into its body. Within its body is a "frozen zone" where those captured within will be able to freeze to death with ease with no heat coming through. It can also breathe out an icy breath to freeze those outside its body. Also, Vaccuma has lethal clawed hands to attack its preys.

When he grows giant, he gets a new power where he can teleport to any location at will. 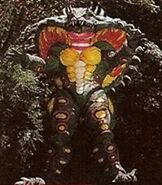 Retrieved from "https://powerrangers.fandom.com/wiki/Absorption_Saima_Beast_Vacuuma?oldid=1050010"
Community content is available under CC-BY-SA unless otherwise noted.