Stage 2: Bring Out the Courage

"That can't be possible...There is nothing I can't eat up! What am I being filled with? I'm full...I'm full!"
―Absolute God N Ma's final words before his death.[src]

Absolute God N Ma (絶対神ン・マ, Zettaishin N Ma) is the main antagonist of Mahou Sentai Magiranger. He is the mysterious leader of the Underground Hades Empire Infershia, going by many titles including Hades Beast Emperor N Ma (冥獣帝ン・マ, Meijūtei N Ma) by Dark Magic Knight Wolzard and the Book of Prophecy and The Great Beast by Sorcery Priest Meemy, N Ma is a being of pure evil that is motivated by sheer malice and an uncontrollable lust to devour everything in sight.

Long ago, N Ma created the Hades Gate to send his armies to the surface and conquer it. After a fierce struggle, he and his followers were defeated and sealed away by Heavenly Saint Blagel. However, N Ma uses a "cursed reincarnation" to transform Blagel into his loyal servant Wolzard. N Ma contacted his minions via a white pool at the center of the lair, which turned red when in use.

While his form was not entirely revealed until Stage 34, his appearance is of Lovecraftian origin. Blagel sacrificed himself once more to stop N Ma by sealing the demon's soul in his own body. The Hades Gods later managed to free N Ma from his new prison and he was resurrected in Hades God Titan's lifeless body, molding it to reflect his own twisted image: a skeletal, fallen angel-like humanoid octopus form. In this new body, N Ma could shoot numerous tentacles from his mouth and use his true power: absorbing all magic around him.

While he used the remaining Hades Gods to fight the Magirangers on the 3rd day of his revival, a fully powered N Ma went to Magitopia to personally destroy it and anyone there. Blagel and Heavenly Saint Sungel went to Magitopia to confront the Absolute God, only to suffer a painful death before N Ma attacks the Magirangers, taking them to the future that the demon intends to create: A world of pure darkness and despair.

But the fact that one flower grew in such an area gave the Ozu siblings enough courage to keep fighting N Ma, with Kai Ozu forcing their foe to bring them all back to the present. By then, N Ma learns that Hades Goddess Sphinx and Phantom Spy Vancuria have ensured Infershia's defection from him, reviving Hikaru and Isamu in the process, resulting with both sides gathered against him.

N Ma was finally destroyed when he attempted to devour the entire Ozu family's (including Hikaru's) overflowing, infinite courage and magic, causing him to explode from the massive build up in his body.

In Hikonin Sentai Akibaranger: Season Two, after General Tsu has Malshina reborn from the Cursed Reincarnation spell as his controlled servant, making her as strong and powerful as Wolzard, Nobuo Akagi (AkibaRed) notes that that same magic was used by Absolute God N Ma, the strongest enemy of the Magirangers.

N Ma is among the vast pantheon of villains which are available in the mobile game Super Sentai Battle Base.

Absolute God N Ma was voiced by Katsumi Shiono in his initial appearance and was later voiced by Daisuke Namikawa after he acquires a body. 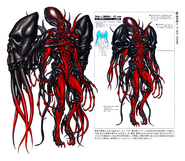