"Leave that to me, Abekonbe. It's because I spent a lot of time serving another master. This is the first time we meet. Very soon, my master will come forward and greet you. I've come as a herald to do a little job."
―Abekonbe's first words when arriving on the Rokumon Junk and after Shitari asked who his master was.[src]

"You bastards!"
―Abekonbe when shooting Chiaki and Kotoha after he forced them to switch back to normal as well as his final words before his initial defeat.[src]

"It's not over yet!"
―Abekonbe being revived as a giant.[src]

"I'm not going to let this end with my humiliation!"
―Abekonbe reacting to DaiKai ShinkenOh and his final words before his death.[src]

Abekonbe came into being around the same time as Dokoku Chimatsuri, though he serves under Akumaro Sujigarano. Representing his master, Abekonbe emerges from bottom of the Sanzu River to offer his aid to Dokoku. Able to fire orbs from his mouth, Abekone possesses the power to switch people's souls with that of inanimate objects, intent on using this ability to turn the mortal realm into a living hell where people unintentionally kill each other. After being forced to mortally wound his body to undo his spell upon being tricked, Abekonbe is slain by Super Shinken Green, and after being revived destroyed by DaiKaiShinkenOh.

He is then mentioned when Akumaro makes himself known to Dokoku, telling him and Shitari how he sent his servant earlier.

According to folklore, the kasha (火車, kasha) is a fiery, cat-like yokai that steals corpses. Abekonbe's appearance and ability to steal souls is thought to be the basis of this legend. 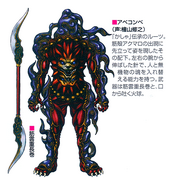